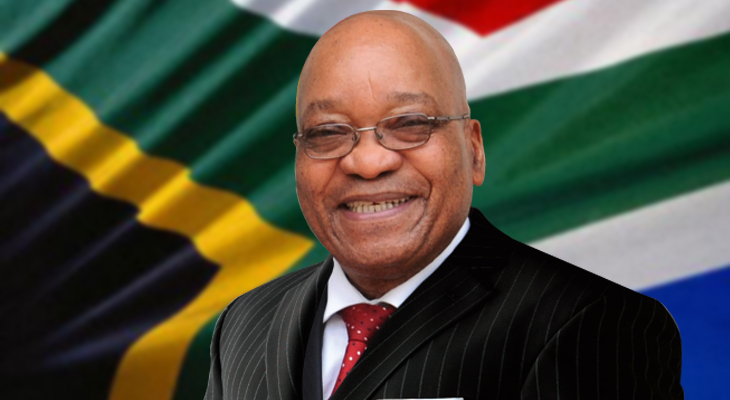 The Shock Doctrine: The Rise of Disaster Capitalism, written by Naomi Klein in 2007, showed how our focus on political transformation in S. Africa concealed the sleight-of-hand at work in the economic negotiations for transformation of the S. African economy.

Those talks bored people. They were more interested in what Nelson Mandela and F.W. De Klerk were discussing at the political table. Thabo Mbeki, who followed Mandela as president, encouraged this lassitude about the economic talks. He said, “I am a Thatcherite,” after working with, and going along with, transnational corporations and international governmental bodies, who wanted to assure that Africa’s largest economy remained open for business to global capitalist imperatives.

They wrote the laws so that the people would be mostly unable to control their own economy. Essentially, Black S. Africans were at the whim of White-dominated corporations, such as De Beers, the diamond giant, who moved its headquarters from S. Africa to Switzerland during the changeover to a Black-majority government, and the International Monetary Fund, (IMF), which held the new government accountable for paying off the massive debt of the previous, White Nationalist government.

Mandela had the power at the time to wipe away the debt, but they found ways to saddle his government with the payments. Instead of land redistribution outlined in the Freedom Charter (Whites expropriated the land–stole it–decades before), Mandela’s government wound up recompensing already wealthy Whites, and their companies, for any losses incurred during the transition to one-man, one-vote governance.

When Klein wrote the book more than ten years ago, Blacks were worse off than they had been in the 1980’s. In the 1990’s, many Blacks received phone service for the first time. A study found that 9 million Blacks were connected to the phone grid. However, because of their terrible wages, many could not pay their phone bills. Another study found that during the same period there were 10 million disconnections of phone service. If both studies were accurate, a million more people were without phone service after the buildout in the late 1990’s.

S. Africa is a more diverse Ferguson, Missouri. It is #Ferguson, the country, if you reduced the White percentage of the population by more than half. Nine percent of the S. Africa are Whites. Asians and “Coloured”–mixed-race people, make up the other 15%, outside of the 76% who are Black. Ferguson, Missouri is 70% Black, 25% White, and the remaining 5% percent are Hispanic or Asian.

The Whites own almost everything, including the media. During the Apartheid days, the media called Black activists “terrorists”. Today, they call them “corrupt”. And so it goes with the government of Jacob Zuma.

Zuma wants Radical Economic Transformation, so that Blacks have a share in the economy. The president wants to redistribute the land that was stolen by the Whites when they colonized S. Africa. A central political problem is that the African National Congress is divided. There are those who speak for White interests–and get favorable media coverage and attention–while the progressive reformers are depicted as corrupt.

Mr. Zuma is on the right track, as the Black middle class has spiked upward on his watch: 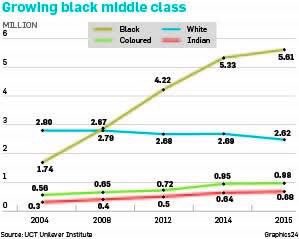 President Zuma has pumped more money than Mandela and Mbeki combined, to assist the funding of Black university students:

Black S. Africans can see the positive direction the Government of Jacob Zuma is taking. There is much more to do, but White privilege stands in the way. Many powerful Whites resent the progress Blacks have made in the past decade. When Zuma fired his White-friendly Finance Minister and replaced him with one looking kindly on Black interests, ratings agencies lowered S. Africa to junk status on the bond markets. Whites are unhappy with Zuma, who will be president until 2019, barring poisoning, or impeachment, which are always threats.

He writes, “Those Whites who think it can still be ‘business as usual’, with White Monopoly Capital continuing to call the shots, and keeping Black people happy with only the ballot box, while they continue to own the land and the means of production, better wake up and smell the coffee. South Africa has reached the critical tipping point where the fault lines of this unacceptable status quo have reached a breaking point, and a shift of major proportions is now unstoppable and inevitable.”

BBBEE works a lot like minority set-asides in St. Louis. Women and minorities are supposed to receive a certain percentage of the business and contracts on public works. White-dominated companies find ways around the system’s laws by wielding their economic might–from purchasing only from White suppliers, to threatening to leave the country altogether; and using levers such as public relations campaigns: there is one going on now called “Save South Africa”, which has co-opted several unions.

The main aim of those against President Zuma is to curtail any fundamental change in the exploitative power dynamics of South Africa. It is past time for the creation of economic justice in that country, and the government is determined to pursue the path to it.

(I express my heartfelt thanks to Nolwandle Ntshiza, in S. Africa, for providing the exhibits in this article.)