One of the first facts you learn in Missouri State Auditor Nicole Galloway’s stinging report on the Ferguson municipal court is that $1,426 went unaccounted for in 2015. (p. 4). Upon investigation, the City of Ferguson subsequently fired a part-time employee. The City goes on to write in its official response that it did not find sufficient evidence to prosecute the individual. Throughout the report, the City’s response to verifiable assertions of weak procedures and lack of documentation in the court is to say that this or that mistake was a discrete event, not evidence of further wrongdoing, and “should not be characterized as such”. pp. 6-7).

The auditing team repeatedly notes in the report that due to a lack of segregation of duties, there were opportunities for loss, theft, misuse of funds, or incorrect record-keeping of transactions. For instance, there were many occasions where any municipal court employee was allowed to lower the fine or fee a defendant owed. Due to improper documentation, numerous discrepancies were revealed.

The manual docket is the official record of court procedures. The electronic Case Management System is the official record of the municipal division. Since several of the employees handling different parts of transactions were not trained in proper procedures or specifically assigned to perform them, many mistakes were made, resulting in loss of funds, improper storage of private information, faulty information on file, and other problems.

I can personally attest to such improper procedures. In the fall of 2015, I had to pay a fine. The person assigned to the task of accepting payment was away. The woman who recorded my payment charged me twice on a credit card. When I happened to be back in the building the next week, the regular employee called me over to void one of the transactions. I could have been over-billed $200, if one or both parties had not paid attention.

In the fall of 2014, during the middle of the unrest in Ferguson, we got a lot of rain. Some upper level rooms of the municipal parking garage were used to store records related to cases closed before January 1, 2015. The roof leaked, causing water damage to the records. The state auditor was never able to reconcile the data between what was found, and what was known about some of the cases whose files were damaged.

The auditing team made visits, and found the records stored in the open, which, theoretically, anybody could access. They saw driver license numbers. Birth dates. Social Security numbers. They also saw some files required by law to be closed. In the report, the City responds by saying that the situation was temporary; that the files were moved there to remediate damage done to the storage area. The auditor replies with the proviso, “I already told you what I found.” 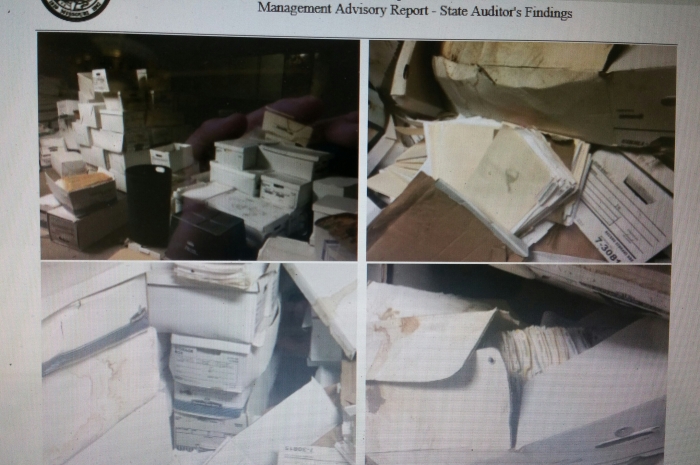 Regarding the disposition of cases, I will quote from the report, on p. 16: “To adequately safeguard receipts and reduce the risk of loss, theft, or misuse of funds, as well as to protect the integrity of the CMS, controls are necessary to provided reasonable assurance that all transactions are authorized, accounted for properly, and assets are adequately safeguarded…”

The Recommendation: “The City of Ferguson Municipal Division establish controls to limit user access to only those functions necessary to perform assigned duties, restrict the user’s ability to modify, edit, and/or delete transactions, and work with the CMS vendor to modify disposition codes to prevent the closure of cases with balances due. If proper system controls cannot be achieved, adequate independent reviews of case activity should be performed and any differences investigated and documented.”

The auditor was not able to determine the reasons for voiding and deleting over 100 transactions in the year and a half between 2014 and the middle of 2015. Evidently, the transactions were entered into the CMS, but they were not manually documented; there was no corroborating evidence that the disposition of a case was based on the court’s specific order. The auditee’s response says the auditing team should have looked at both the manual and electronic records to reconcile the information. Again, the auditor responds that her team did look, and that is what they found.

Ferguson says over and over in the report that the Consent Decree agreed in March, 2016, with the Department of Justice precipitated and necessitated changes in policies and procedures, leading to the lowering of fines and fees. But it seems to lay the fault for, or suggest that it is the fault of, the Consent Decree, that there were numerous discrepancies in the records. For example, regarding bonds for defendants, the report states that “while the municipal division’s response cites mandates related to the City’s Consent Decree, nothing in the decree applied to the citations discussed in the finding, and it is therefore irrelevant to those cases.”

I said on Twitter that one would think after everything that has occurred in Ferguson that Mayor James Knowles would have or should have known about the disarray in the municipal court, and made some significant moves. He has not bothered to care. His supporters, the people who re-elected him, do not hold him to a high standard. Essentially, he, and they, do not see things as we do.

We think this is a disgrace, to the City of Ferguson, to its people, and to the nation. We expect better, nay, demand better. This city has proved, once again, that it cannot do the right thing without being pushed. Where would it be, without us? We are the conscience of Ferguson–the protesters, the activist residents, the victims of  its mal- and mis-feasance. The matter of #Ferguson is far from over.