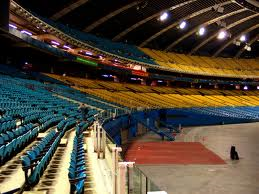 Up, Up & Away contains one of the longest subtitles of any book in history. It’s crucial to his thesis. The book is the rollicking, tragic story of the National League’s Montreal Expos of 1969-2004. Major League Baseball took control of the club in 2002, moving them to Washington, DC for the 2005 season. They renamed them the Nationals.

Mr. Keri is a native Montrealer who grew up an Expos fan. He made infrequent jaunts with his friends around the country to follow them. He wrote The Extra 2%: How Wall Street Strategies Took a Major League Baseball Team From Worst to First. His new book is an affair of the heart, and an elegantly worded cri de coeur. His message: those responsible made major strategic mistakes along the line. Don’t do this to sports fans again.

EIGHT QUESTIONS FOR JONAH KERI ON UP, UP, & AWAY

JK: It definitely hurt a lot from a fan’s point of view. This really was a case of lack of vision and foresight. If the Expos had done nothing other than keep those four players in ’95, they’d have a chance for another playoff run, maybe many runs. Hell, even just keeping them until the July trade deadline would’ve greatly increased their leverage, allowing them to bag good, young talent in return, and reload on the fly. Don’t forget they just missed making the playoffs in ’96, even after the fire sale. Get real talent in exchange for those four guys and who knows, maybe they’re celebrating a World Series title that year.