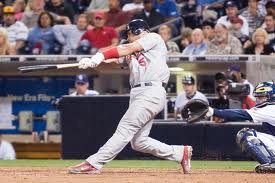 Albert Pujols is the first major league baseball player in history to hit his 499th and 500th home runs in the same game. He hit them off Taylor Jordan of the Washington Nationals Tuesday night, in a 7-2 Angels victory in the nation’s capital. He leads the major leagues in home runs, with 8.

Cardinals fans could be forgiven for not missing The Machine in the two years since his departure after the 2011 season. Pujols had his worst year statistically in 2012, and the Angels missed the playoffs by one win. The Cardinals advanced to the National League Championship Series, losing in seven games to the eventual world champion San Francisco Giants. Allen Craig, in his first year playing full-time, powered the Cardinals in 2012 as the regular first baseman. Craig slugged .522 with 22 home runs in 2012.

In 2013, Pujols shut his season down in July after conceding that the plantar fasciitis he’d been dealing with throughout his career had become too bad for him to continue to play. He posted his fourth straight season of declining performance. Allen Craig, though his power was down, and he missed most of September with his own foot injury, provided solid production. Matt Adams replaced Craig and hit 17 home runs in 2013, second only to Carlos Beltran on the team. The Boston Red Sox defeated the Cardinals in six games in the World Series.

Pujols experiences plantar fasciitis in his left, or front, foot as a right-handed batter. He opens his hips first to start bringing his shoulders through his swing. When the energy was sent to the front foot in 2013, the foot buckled; it could not hold the energy of the swing through the point of contact. This meant that pitches in he rolled over to the left side. Pitches away he flailed at with a noticeable lack of a base. He looked bad.

Take a look at this video of Pujols hitting a home run the other night in Detroit:

Notice the quick and easily repeatable action in his front foot. This movement is his mechanism for beginning his weight shift. The front foot is able to hold the tremendous energy he unleashes through his core muscles.

Albert is not getting on base the way he used to–yet. His on-base percentage stands at .337 today. He’s pounding the ball again, slugging over .600 in 2014. There’s no certainty the foot problem won’t recur. His size and occupation work against him. It’s early, but if Albert Pujols can keep the pain at bay, he can stoke Angels’ fans dreams all season long.

In St. Louis, the duo of Matt Adams and Allen Craig has not been able to match the production of a single Albert. Craig has simply been bad, with a .184/.241/.263 slash line through today. Adams does well against right-handed pitching, but has been dismal against left-handers, hitting .143/.200/.143 so far. The latter was expected, with hope for further development and improvement. Allen Craig’s struggles are more ominous, portending a further decline from his drop in slugging last season. The Cardinals are trying to jumpstart Craig by giving him a lot of at-bats in the 2-hole in the lineup. So far, he has not responded.

I discuss this in the video.